The map of the 100 Bridges Run with the complete running route (subject to change). Please note: a number of bridges are only open during the 100 Bridges Run. You cannot walk this route completely on your own. The 10 kilometer runners start from the start/finish on the Vismarkt and then run to bridge number 48 and pick up the route from there. You can also see where you can expect the care stations. 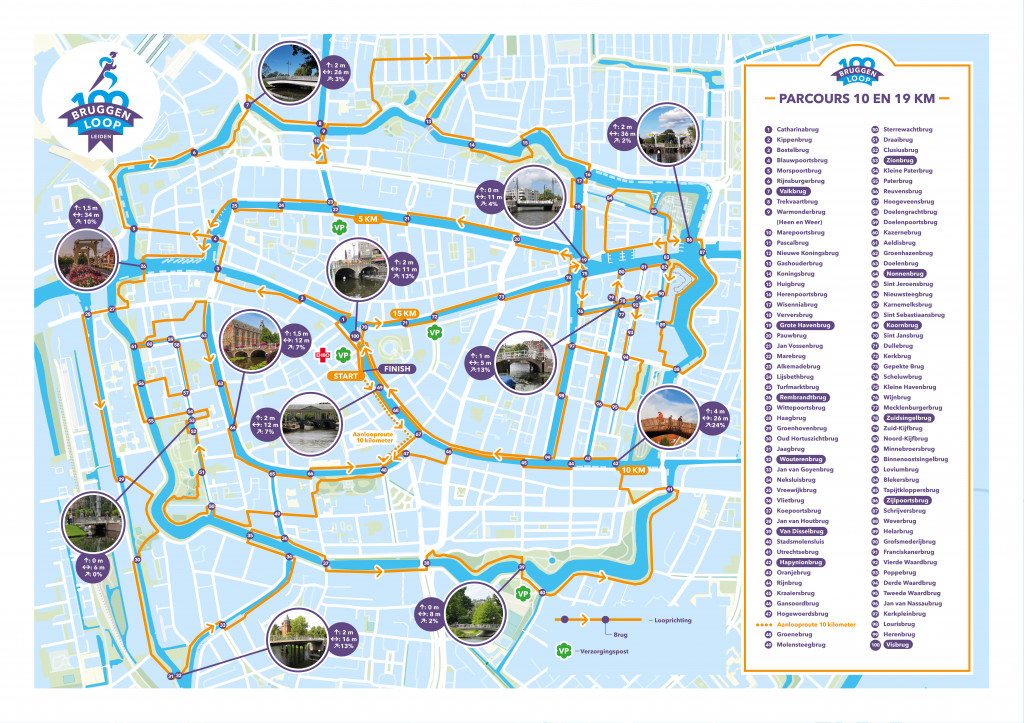 The 100 Bridges Run takes you past the most beautiful places in the historic city center of Leiden. Start and finish are at the Vismarkt, the place where Leiden originated around 1200, on the banks of the river Rhine.

The 19 kilometer runners first go downstream via the Rhine to the area around the northern moat. This used to be the raw industrial heart of the city. You pass a number of beautiful industrial monuments, you walk through the special architectural district of Nieuw Leyden and through the Cultural Quarter, which includes Museum De Lakenhal, Museum Volkenkunde, Molenmuseum De Valk and the Leidse Schouwburg. When you pass the famous Rembrandt Bridge over the Galgewater, the first 26 bridges have been completed.

Then you walk towards the area around the southern city moat. The wealthy lived here. You walk along the Jan van Goyenkade along the Vliet and through the beautiful Plantsoen, an English landscape park. On the way you climb the famous Vlietbrug, where the Geuzen entered the city to chase the Spaniards out of the city. Another special bridge is the Hapynion Bridge, one of the new (step) bridges in the Singelpark and at 4 meters the highest on the course.

The third loop goes through the Academy district. This is the domain of the oldest university in the Netherlands. Via the Van der Werffpark you walk to the Hortus Botanicus, where a number of bridges have been opened especially for the 100 Bridges Run. Then the route goes over the Rapenburg, the most beautiful and oldest canal in the city. 69 Bridges are already in place when you walk close to the start-finish line again for the fourth and last part.

We save most bridges for last, in loop 4: the Havenwijk (harbor district). Over a maze of canals you pass another 31 bridges. You walk along the harbor, through a number of beautiful new parts of the Singelpark and along the Herengracht. At the imposing Flour Factory you have the feeling that you are running the New York marathon through Manhattan. Finally you arrive at the last, oldest and steepest bridge with a final sprint: the Visbrug over the Nieuwe Rijn.

The runners who run the 10 kilometers will go upstream via the Rhine from the Vismarkt to bridge number 48, the Groenebrug at the Van der Werffpark, and will join the route of loops 3 (Academiewijk) and 4 (Havenwijk). So you go up and down 52 bridges and you walk largely through the heart of the car-free historic city center.

Walkers walk on their own on Saturdays. You can start between 8 and 10 am. You can determine your distance and the number of bridges you want to walk. For example one or two of the above loops. Each loop (northern moat, southern moat, Academiewijk, Havenwijk) is approximately 5 kilometers, with approximately 25 bridges. The challenge, of course, is to do all 100 and walk the full 21 kilometers. Slightly longer than the running route, because we have added one extra highlight to the route: the beautiful Groenesteeg Cemetery, the place where the dignitaries of Leiden were buried until 50 years ago. The main challenge of the walking tour: don’t succumb too often to the many cozy terraces that you come across along the way.

To take into account when choosing a shoe: you walk on gravel, shell paths, brick, cobblestones, wood, concrete and asphalt. And if you’re going to cut corners: over grass.

The course of our trail run has many very steep bridges, bridges with steps and narrow paths. That is why the 100 Bridges Run is unfortunately not suitable for the disabled.

Here is a video of the complete running route in Relive.

PLEASE NOTE: some bridges are only open during the 100 Bridge Run. You can therefore not complete this route at other times of the year.

Below you can view the course of the route and you can also download the route in GPX or KML.